August is here with big festivals and village parties. Aside from the fact that there are no weekends in August where there is no great village party in our nearby villages, major international events take place here too. 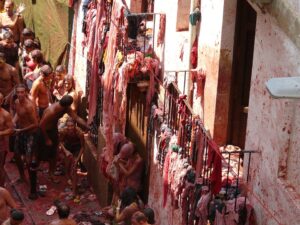 The famous tomato war and people coming for it all over the world.

When: August 28, 2019 (always takes place on the last Wednesday of August)

Where:  Buñol, Valencia (one village from us towards Valencia – about 25km from El Nido Feliz)

For a few years now, the event has been with tickets and usually sold out to the last ticket (around 20,000 people coming). This year, the cheapest tickets (12eur) are out of stock now, but there are still several combinations available, such as a ticket and T-shirt or ticket and paella or ticket and after-party. You can buy tickets in the website.

The festival started in 1945a (it was forbidden in the meantime and started again in 1957a) and was originally a local party for the neighbors that eventually grew into a large-scale international festival. Today it is one of the most internationally known and visited festivals in Spain. To go – wear comfortable clothes type “use it and throw it away”(because they are fully covered with tomato spear) and bring clothes for later replacement. There are lockers for your stuff and documents. The event takes place before lunch and lasts for several hours.So what does this really look like?

When: August 21st – 1st. September 2019 (always the last week of August and the first week of September)

Where: Requena, Valencia (from our village the next city towards Madrid – about 27km from us)

Oldest wine festival to date in Spain – started 1948 and runs 71 times. Festival activities include a day and night party; grape treading; different processions and of course lots of wine. You can get an idea of ​​what’s going on when you look at last year’s festival overview: