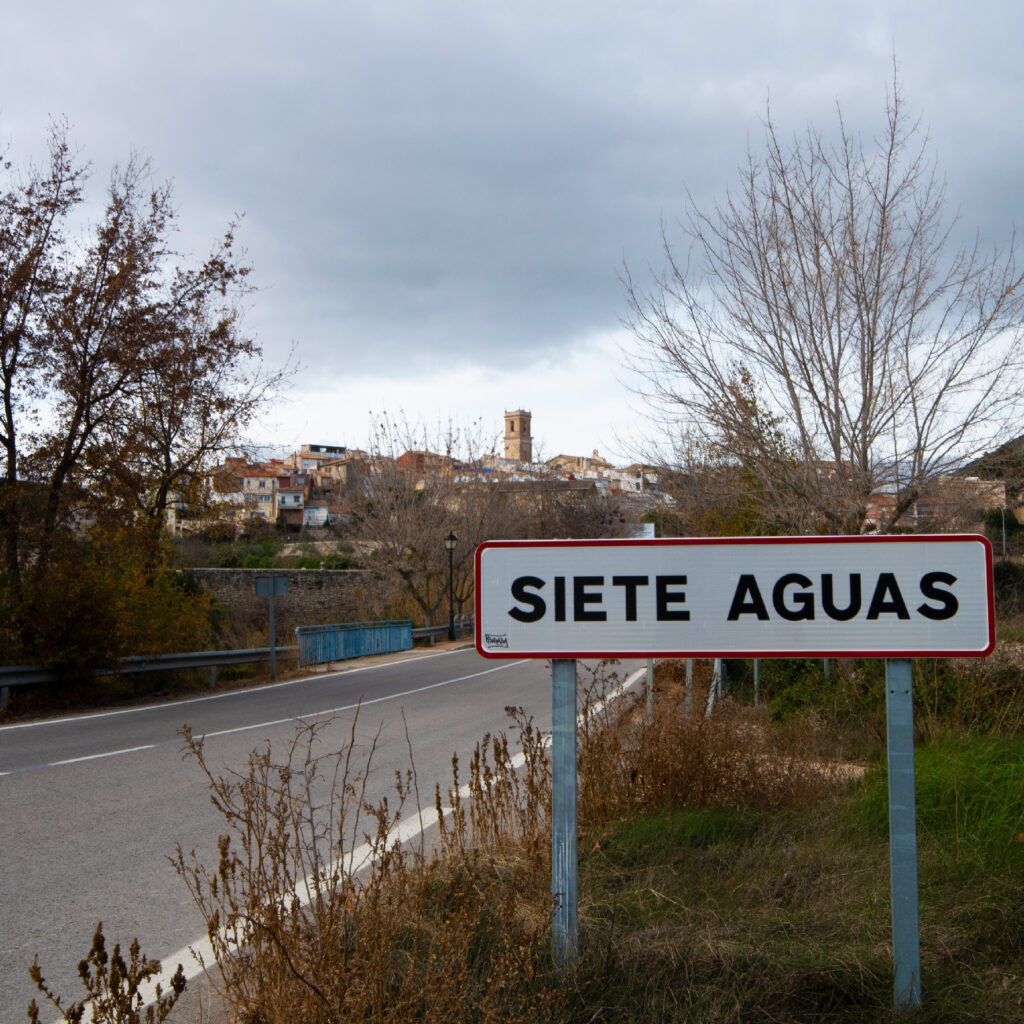 Siete Aguas is located in the Sierra de las Cabrillas in the Province of Valencia, Spain. The village is about 600 m above sea level, but the surrounding hills reach over 1000 m. The name of the village means Seven Waters in Spanish and comes from the fact that in the old days, coming from Valencia, you had to cross the river seven times to get here. 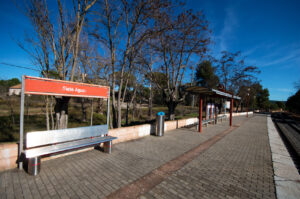 Connections to the city of Valencia are easier and faster these days – by car is easily accessible on the rout A-3 (about 50km). There are also buses and suburban trains a few times a day between the village and Valencia (El Nido Feliz is 10 km from the village and public transport is not available here. Arrangements for transportation can be made).

The area has been inhabited since the Stone Age (as evidenced by rock drawings and many archaeological findings), but the first written record of Siete Aguas dates back to 1260, when Jaume I, The King of Aragon and Valencia, donated these areas to his mistress Berengel la Ferrandis and to their common child. At that time, the area was called Setaygues in Old Valencian language. It was the border region of the Kingdom of Valencia, and in order to create a Christian community in a Muslim-populated area, the King sent 30 knights with their families to live in Siete Aguas.

The Hermit, located in the village, was built by thankful  King Jaume I in 1273, who found refuge in the animal shelter (which was the only building nearby) during the terrible storm night. Originally, the Hermitage was dedicated to Santa Barbara as the co-patron of Siete Aguas. In the 17th century, the legend was born that San Blas came in pilgrim clothing and healed a child with severe throat disease, and since then Santa Barbara has lost its popularity and the hermit was dedicated to San Blas. 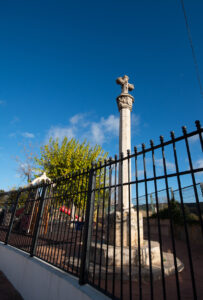 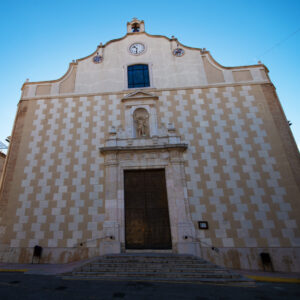 The construction of John the Baptist Church began in the 16th century, but was not completed until 1794. The church has a rare stone mosaic in front, and inside the church you can see the work of the sculptor from our village, Vicente Rodilla.

Since 1761, Siete Aguas, with its surrounding villages, has been under the Spanish Crown.

Siete Aguas is a mountain village which is not as hot in summer as the city of Valencia. Although the city is less than an hour’s drive away, our village is like a different world – full of green trees, birdsong and spring water. Popular hobbies are mountain biking, running and hiking (or just walking in the nature). 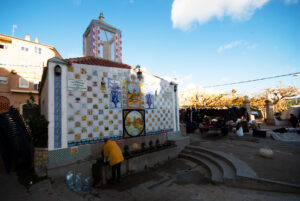 People say that local spring water is curative. They also take the delicious drinking water by canisters to Valencia. In 1891, a mineral water spa was opened in the village, which unfortunately decayed after the war and was not restored. More than 50 beautiful springs remain on the territory of Siete Aguas.

Medieval dwellings are almost no longer preserved in the village. But as a popular holiday destination, many beautiful and original houses have been built in the village at a later date. 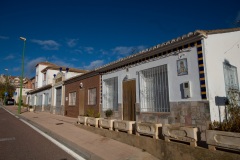 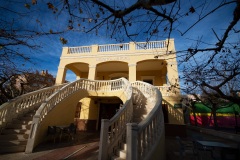 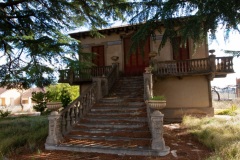 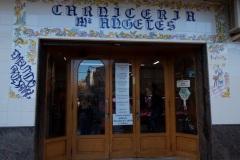 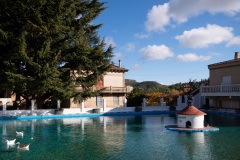 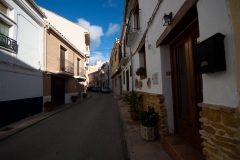 Siete Aguas has about 800 inhabitants throughout the year, but there are many more for housing, as city dwellers have holiday homes for summer and long weekends.

To understand how a quite small village in Spain is living, we have: 2 butchers; 2 bakeries; 3 hairdressers; laundromat; 7 restaurants and a few more bars and cafes in addition. The village has elementary school, a small concert hall, small orchestra and choir. Supermarket and other stores are opened 6 days a week. Children play football on the roofed football field and in summer, people can use an open-air swimming pool. The bank opens its doors two mornings a week, and the post office is open for 30 minutes every business day (after the mailman has delivered the mail). On Tuesdays and Sundays, there is a market on the streets of the village (both groceries and manufactured goods). 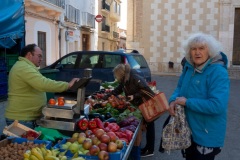 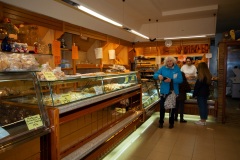 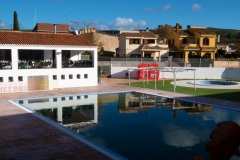 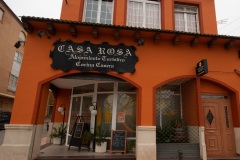 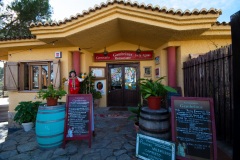 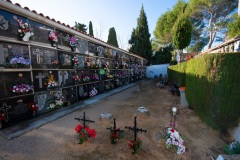 Siete Aguas has a small bodega where a 90-year-old oenologist, Jesus Requena Gomez, makes wine. This is exactly the kind of intermediate place that I don’t really qualify for as an industry, but it’s no longer a pretty knee-deep winery. He cultivates the Albariño grape for white wine and the Mencía variety for red wine. Neither of them is typical of the area, but since the host has spent most of his life working in Galicia, he took his preferences from there. 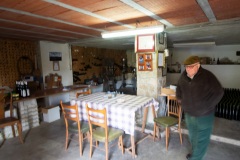 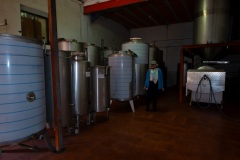 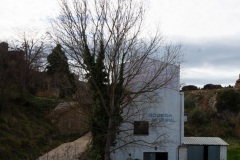 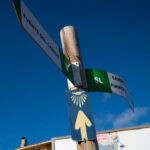 There is also one of the pilgrimages to Santiago de Compostela, the Ruta de la Lana, crossing the village. It is no longer one of the most important pilgrimage routes today, but it is a historically important route that connected Valencia with Santiago de Compostela and for many centuries worked a hospital in the village, mostly used to serve pilgrims.

Campfires of San Antón (Las Hogueras de San Antón) – celebrated on the second Saturday in January. There are a mass during the day, and a blessing of pets. Many bonfires are lit in the evening, competing for the title of the most fierce campfire.

Easter – celebrated with a procession and concerts

Midsummer Eve – As John the Baptist is the patron of Siete Aguas, unlike the surrounding villages where Midsummer Eve is not celebrated, it is an important day for Siete Aguas. There are masses, processions, concerts, bonfires in the middle of the village on Midsummer night, etc. At Midsummer Night, you have to wash your face with spring water in the middle of the village to ensure happiness, to maintain a youthful appearance, and to prevent illness and distress. The village also offers a cake and Mistela to all the festivities.

Bullruns – At the end of June, in the first half of July, at weekends, the bulls are allowed to run down the village streets with torches on their horns.

August – Siete Aguas is full of people mostly from Valencia and Madrid in August when all Spain is on holiday. One celebration, procession, concert and event chases the other almost uninterrupted. The opening and most important is the Fiestas en honor al Santísimo Cristo de los Afligidos, which will take place in early August.